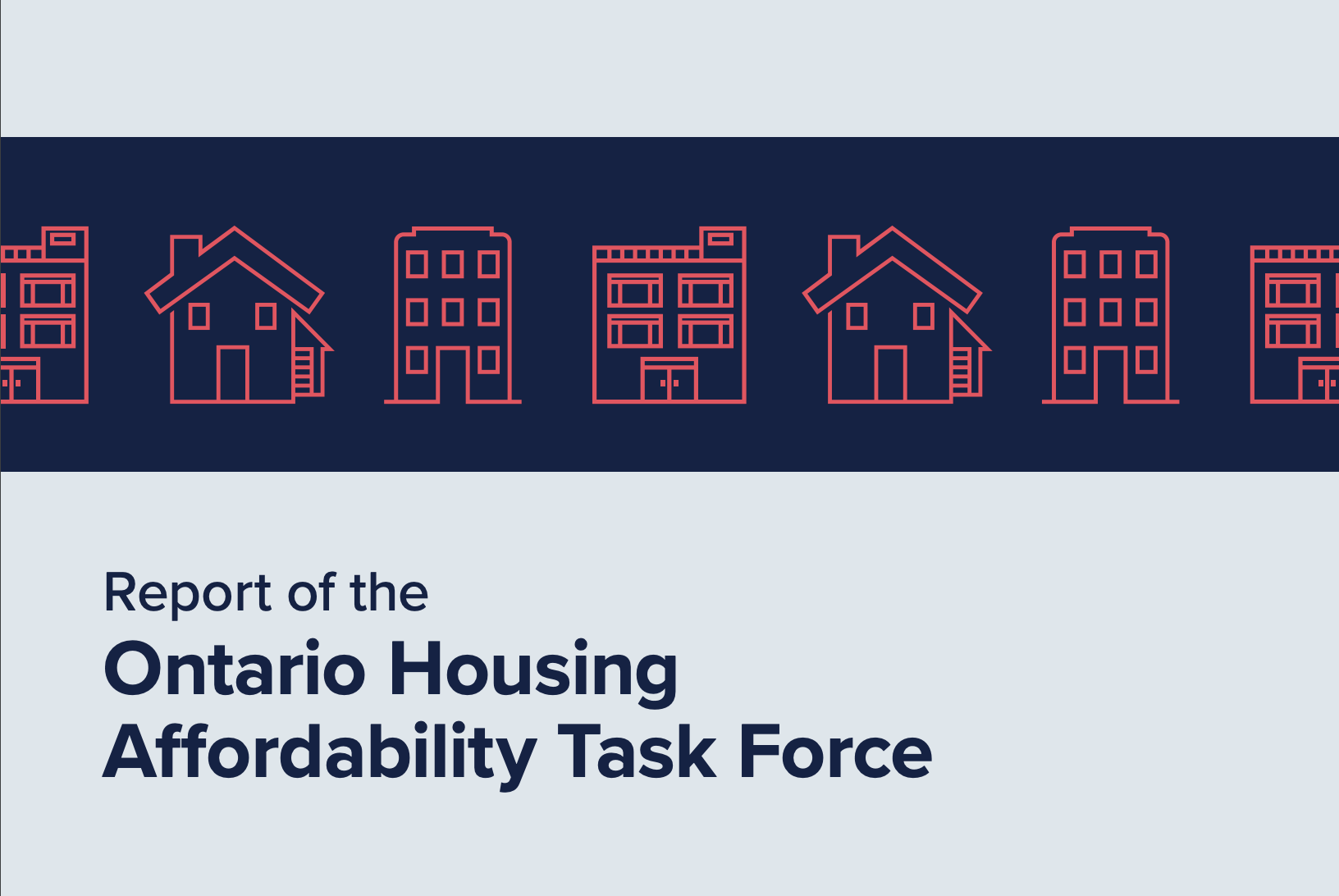 TORONTO - Today, the Ontario Housing Affordability Task Force released a comprehensive package of recommendations to drastically increase private market housing supply in Ontario. We believe these actions have the potential to significantly improve long-term ownership and rental housing affordability in the province. More Neighbours Toronto, a volunteer-led housing advocacy group, is calling on the provincial government to take immediate steps to legislate and implement the breadth of the recommendations from this report, particularly those that overlap with policies advocated for in the More Neighbours Toronto submission to the Task Force.

"Evidence suggests that Ontario’s accelerating multi-year housing crisis has been caused by not building enough homes to meet the needs of our growing population. Housing advocates have long known what the solutions are, and the Task Force has reaffirmed many of them. This can be the turning point for Ontario to end the housing crisis, provided the provincial government moves quickly to implement this report’s major recommendations", said Jacob Dawang, a volunteer with More Neighbours Toronto.

More Neighbours Toronto agrees with the report’s two primary focuses: first on intensifying growth in urban areas by ending exclusionary zoning practices and permitting fourplexes, garden suites, laneway suites, and multi-tenant houses everywhere, and secondly, by fixing the labyrinth of rules, processes, and practices used by municipalities to thwart or delay reasonable housing growth. Ultimately, it aims at a broad swathe of municipal planning rules that are at the heart of Ontario's housing crisis. It also recommends enacting changes through provincial tools to ensure that municipalities do not make multifamily homes practically (while not technically) illegal through means such as heritage designations, excessive urban design guidelines that prioritize aesthetics over housing, and unnecessary drawn-out public consultations.

The report also acknowledges the significant opportunity for housing growth near transit, recommending that the province allow mid-rise apartments up to 11 storeys near bus and streetcar routes, and unlimited density near subway and regional rail stations for municipalities that have not approved enough density within 2 years. This would unlock large transit-accessible parts of Toronto and Ontario for more intense uses than allowed for by current policy. Additional suggestions for mixed commercial and residential use along these corridors has the potential to rebuild main street culture and create new complete communities province-wide. Finally, by recommending the legalization of wood-frame construction up to 12 storeys, the Task Force is giving these developments the option to build with a low-carbon, lower-cost alternative to concrete and steel construction.

The Task Force recommends limiting public consultation to large, more complex housing developments while streamlining the approval process for gentle density and eliminating consultations for projects under 10 housing units that meet official plan guidelines. When public consultation is necessary, the Task Force suggests requiring digital participation options to improve accessibility, even after pandemic restrictions ease. Virtual options eliminate barriers to participation for those with accessibility needs, working people with busy schedules, parental/caretaking responsibilities, and is a necessary step in surfacing diverse voices from across the socio-economic spectrum.

"Digital options have brought new voices and viewpoints to public consultations that were previously unheard. Because of online options, many More Neighbours volunteers, myself included, have been able to attend public meetings, ask questions and present our views for the very first time," said Emily Bain, a busy young mother and More Neighbours Toronto advocate.

While more housing supply is desperately needed, very little in the Task Force suggests promoting uneconomic and unsustainable suburban sprawl at urban boundaries, calling for any new growth to be dense, sustainable, and with complete communities in mind. As the Task Force report notes, there is no shortage of land and demand for new housing can be accommodated almost entirely within the current urban boundaries.

"People want to live in existing neighbourhoods that are already walkable, well-serviced, and close to their friends and family. More 'drive until you qualify' sprawl is not a serious solution to the housing shortage in our major cities," said Eric Lombardi, the founder of More Neighbours Toronto.

While the actions listed in the Task Force's report are a good start to expanding supply of market-rate housing, other solutions outside of its mandate will also help solve the housing crisis. All levels of government need to increase funding for public and affordable housing. We will continue to advocate for creating a public builder to compliment private sector homebuilding and to meet needs underserved by the market. Furthermore, none of the recommendations in the report conflict with taking additional demand-oriented policy action to reduce undesirable speculative housing demand from over-leveraged multi-property owners and non-resident investors. Nevertheless, we encourage the provincial government to enact the breadth of these recommendations as soon as possible instead of waiting until after the June provincial election. Finally, we encourage all provincial parties, the Progressive Conservatives, The Ontario New Democratic Party, and the Ontario Liberal Party, to work together to pass significant reform instead of nitpicking at the policy margins to undermine action.

More Neighbours Toronto is a volunteer-led organization of housing advocates that believe in building more multi-family homes of all kinds for those who dream of building their lives in Toronto. We advocate for reforms to increase our city’s ability to build more homes in every neighbourhood. We are a big-tent organization with members across the political spectrum who are nevertheless committed to counterbalancing the anti-housing agenda that dominates Toronto's politics, created an affordability crisis, and has cost burdened a new generation of aspiring residents. We are firmly committed to the principle that housing is a human right and believe Toronto should be inclusive and welcoming to all.